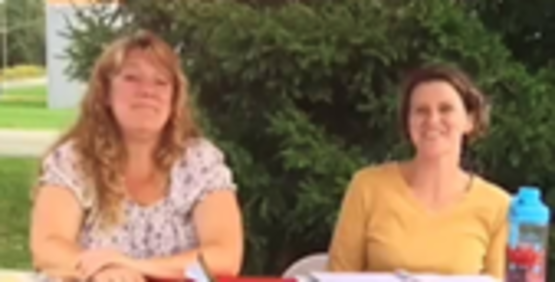 Heather Gregory and Trish Dragoo have ventured into the world of Facebook Live and are planning their weekly dinner menus in real time. During their 30-minute presentation, each Friday at 11:30 AM, they discuss the challenges and pitfalls of planning family meals, offer tips on how to incorporate more veggies into your meals, answer questions from viewers and go over local sales flyers. They emphasize flexibility and the importance of letting go of feelings of guilt and failure when days or weeks do not go as planned. All Live posts, including the weekly menus and more, can be found on the Nutrition Educators of CCE Chautauqua County Facebook page.

On December 12th, Trish and Heather visited Gail to record another episode of, “Fresh Perspectives”. In this episode, Trish and Heather do a cooking demonstration and make “Mulligatawny Soup,” due to air and post January 9, 2021. Heather and Trish will return to do episodes about yoga and smoothies. Watch for these February 27th and later in April.

The EFNEP Program is one of many programs offered by Cornell Cooperative Extension of Chautauqua County (CCE-Chautauqua). CCE-Chautauqua is a subordinate governmental agency with an educational mission that operates under a form of organization and administration approved by Cornell University as agent for the State of New York. It is tax-exempt under section 501(c)(3) of the Internal Revenue Code. The association is part of the national cooperative extension system, an educational partnership between County, State, and Federal governments. As New York’s land grant university Cornell administers the system in this state. Each Cornell Cooperative Extension association is an independent employer that is governed by an elected Board of Directors with general oversight from Cornell. All associations work to meet the needs of the counties in which they are located as well as state and national goals. For more information, call 716-664-9502 or visit our website at www.cce.cornell.edu/chautauqua. Cornell University Cooperative Extension provides equal program and employment opportunities.