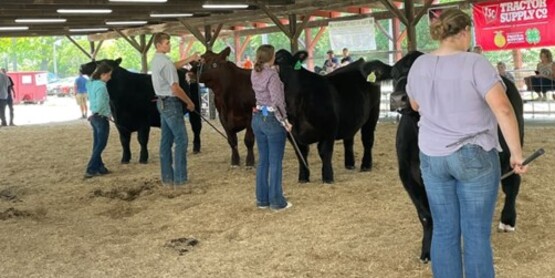 The 4-H Beef Program offers two options for participants: either raising a steer to sell at the Meat Animal Sale at the county fair and/or raising a beef heifer to show and possibly bring back to fair with a calf by her side. All participants in this program attend meetings and gain knowledge about raising beef animals in preparation for showing them at our county fair. Beef animals can be unpredictable and are over ten time the weight of their handlers. The participants have worked with their animals since last October and produced animals that behaved beautifully in the show arena. That takes many hours of work and lots of perseverance on the part of the kids.

In the Breeding Show, the Supreme Female, AHTH Almost Famous, belonged to Lydia Covert of Lakewood and the Reserve Champion Female was shown by Corinne Covert of Lakewood. Lydia is eligible to show her heifer at the New York State Fair in August for NYS Supreme Female in the entire state. Hannah Schauman with her heifer, Twilight, is also eligible to show at State Fair due to Lydia winning Supreme Female at another show previously. Grand Champion Overall Heifer Showman was Lydia Covert, and the Reserve Overall Heifer Showman was Wyatt Harrington of Stockton.

The 4-H Beef Project is one of many programs offered by Chautauqua County 4-H. If anyone is interested in joining the beef project or any other program offered by the 4-H Youth Development Program of Cornell Cooperative Extension, please contact Lindsey Crisanti at 716-664-9502 x212 for more information.