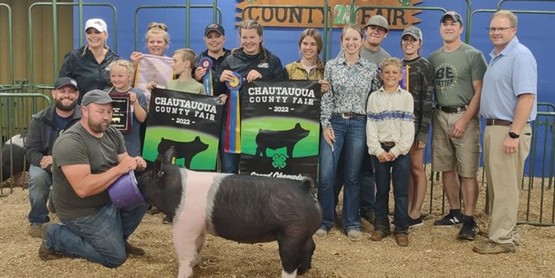 DUNKIRK, NY (July 24, 2022) - Chautauqua County 4-H Youth have been super excited to be back at the Chautauqua County Fair and glad that it is open to the public! Squeals of excitement were heard from the hogs and youth, and a few of the spectators as they participated in Swine Market and Showmanship Classes on Monday, July 18, 2022. Jeremy Lipps of New Paris, Ohio judged the show.

The Showmanship classes consisted of three divisions and 48 youth. Senior Showman, being the most experienced showman, starts the show, this gives younger youth an opportunity to pick up last-minute pointers. Rachael Harper was named Grand Champion Senior Showman and Lilly Underburg was named Reserve Champion Senior Showman. Among the junior showmanship class, Garrett Lesch took first and Lance Griswold took second. Earning the Division Champion and Reserve titles which it also earned these participants entrance in the Champion Showman class.

Following the showmanship class was the market hog show. The market classes are divided into weight classes.

The first weight class was the 220 - 229-pound class which was won by Morgan Becker followed by Landen Ellsworth in second.

Second class was the 230–239-pound class and in first place was Hannah Schauman and in second was Elizabeth Case.

Third class was the 240–249-pound class which was Lilly Underberg in first and Leah Chase in second.

Fifth class the weight range of 260-269 winners were Hannah Schauman who took first place and in second was Morgan Becker.

Sixth class with a weight range of 270 – 279 pounds winners were Lexi Cross taking first place and second was won by Jaiden Huntington.

Champion and Reserve Market Hogs from each weight class compete for the Grand Champion Market Hog title, which went to Lilly Underberg.

Congratulations to all youth who participated in the 4-H hog show this year!